North Carolina leads the nation in flue-cured tobacco production, but market decline has left many growers seeking other opportunities to make up for lost revenue. Floral hemp (Cannabis sativa L.) grown for biomass and cannabidiol (CBD) extraction fits nicely in a tobacco production model. Growers found early on that much of their knowledge (ex: obtaining and managing large labor crews), equipment (transplanters, spray equipment, etc.; Fig. 1), and infrastructure (curing barns) can be used in the production of floral hemp. 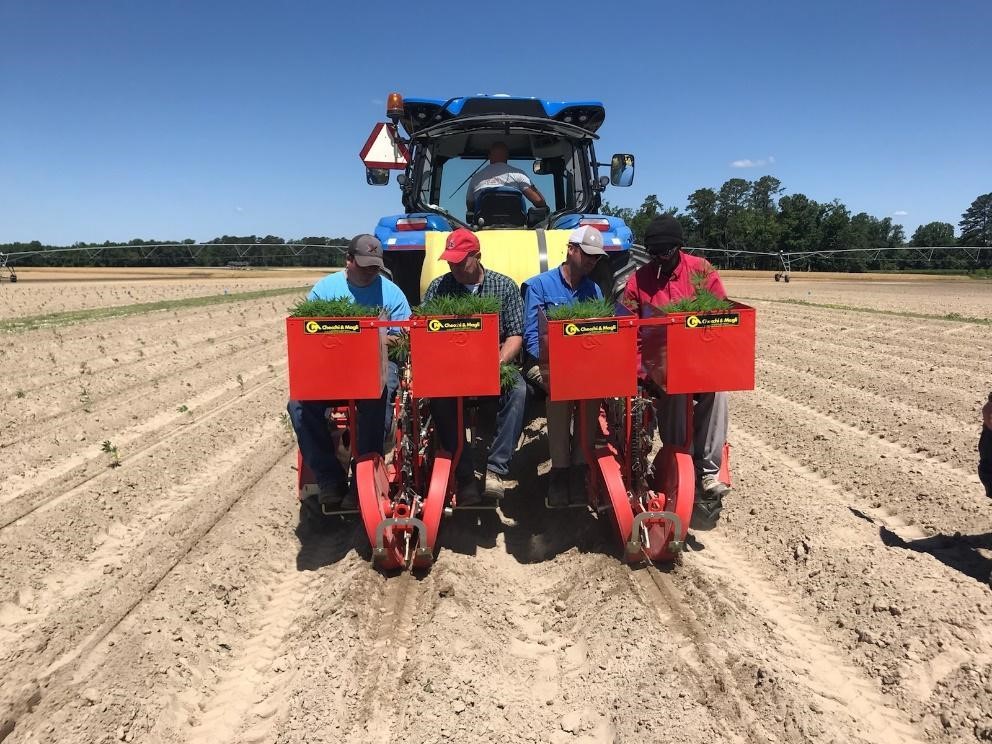 While production of hemp was common prior to the 1940s, prohibition of all Cannabis led to the loss of production knowledge. Consequently, we find ourselves with a “new” crop requiring the development of research-based production recommendations.

Nutrient management is one of the most important factors to ensure optimized production for any crop. Lacking clear fertility guidelines, a grower risks loss of production due to under-application of nutrients or, conversely, loss of revenue due to over-application and unnecessary expenditures on excess fertilizer. Additionally, over-application of nutrients poses a significant risk to our groundwater and environment through leaching and volatilization. As such, the following research was conducted to establish nitrogen and potassium fertilizer recommendations for optimum yield and CBD production as well as understanding nutrient rate effects on THC production. While this research focused on a tobacco production model (use of common equipment, cultivation, spray regimes, etc.), we feel confident that the generated recommendations will fit other floral hemp production systems.

Two separate studies were conducted in 2019 and 2020, a nitrogen fertility test and a potassium fertility test. In 2019, both the nitrogen and potassium tests were carried out at four locations: the Sandhills Research Station in Jackson Springs, NC (Fig. 2), the Piedmont Research Station in Salisbury, NC (Fig. 3), the Lower Coastal Plains Research Station in Kinston, NC, and an on-farm location in Bertie County, NC. In 2020, the nitrogen test was conducted at the same four locations; however, the potassium study was only conducted at the three research station locations. Soil type in the Salisbury location was a clay loam, a deep sand in the Jackson Springs location, loamy sand in the Kinston location, and a sandy loam in the Bertie County location. 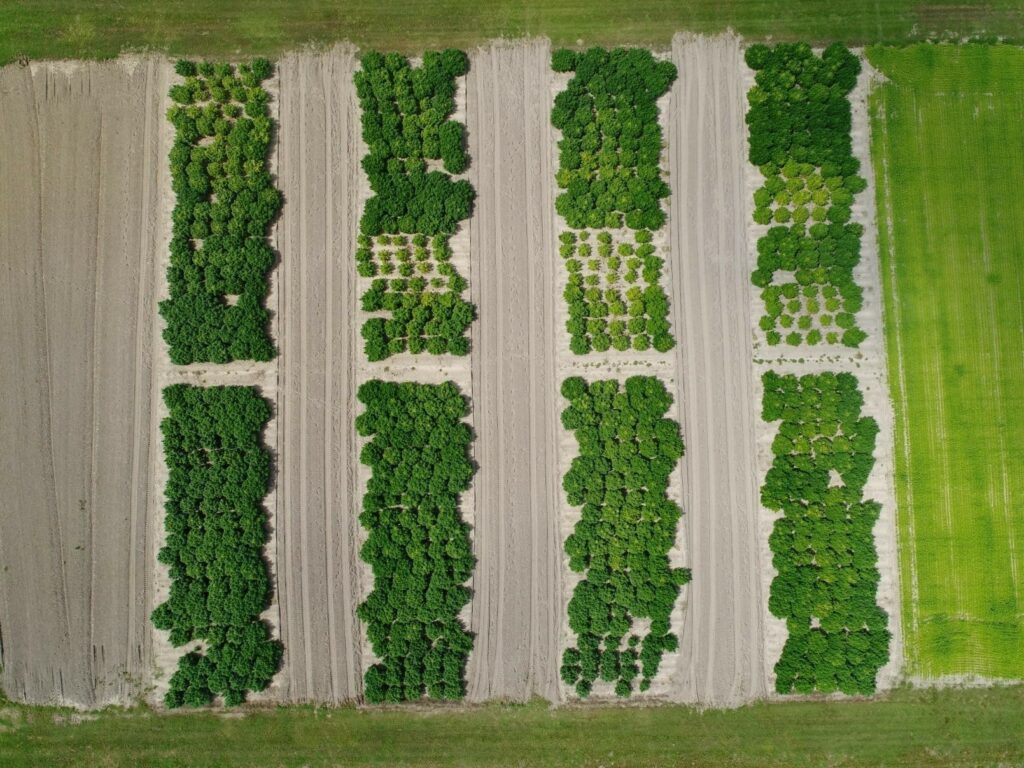 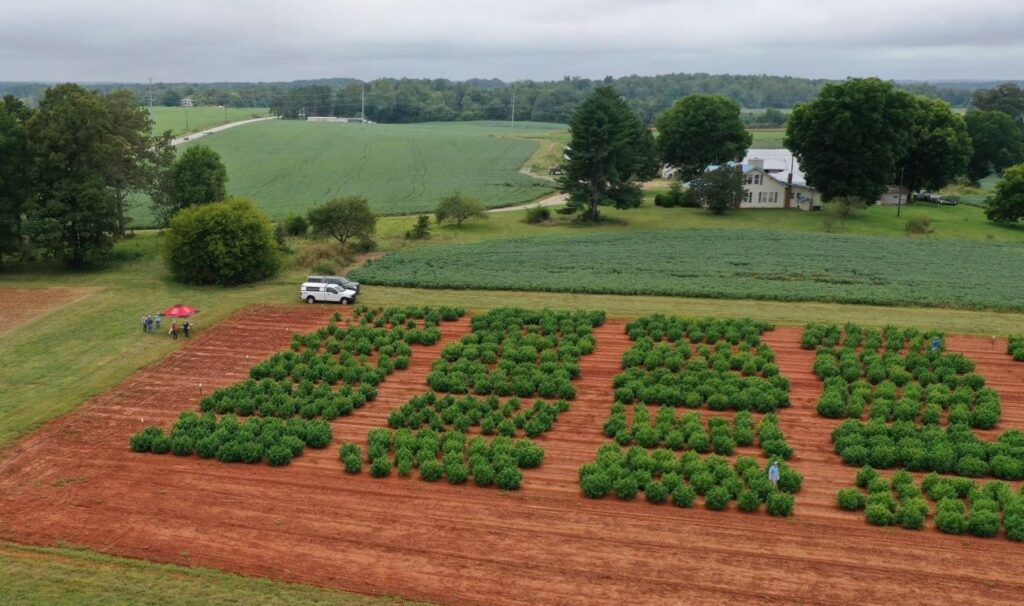 The nitrogen trial compared five nitrogen fertilizer rates: 0, 50, 100, 150, and 200 lbs N/ac. Nitrogen was applied as 28% liquid UAN and was split-applied 10 days after transplanting (DAT) and 28 DAT via backpack sprayer. All other nutrients (potassium, boron, phosphorus, etc.) were applied evenly throughout the field at 10 DAT.

Similarly, the potassium trial compared five potassium (K2O) rates: 0, 50, 100, 150, and 200 lbs K2O/ac applied as potassium sulfate, which was applied by hand 10 DAT. Nitrogen (100 lbs/ac) in this trial was split-applied consistently throughout the field at 10 and 28 DAT, while all other nutrients were applied at 10 DAT.

Harvest occurred once flowering plants reached ~50% amber trichomes (mid-September – early October). Fresh floral samples from the lateral branches of six plants per plot were collected and submitted for cannabinoid analyses. Three plants per plot were collected and dried in tobacco bulk barns at 150°F (Fig. 4). After the plants were dried (~3 days) they were debudded (AKA bucked) which entailed removing the stems of the plants, leaving only the floral material and any remaining leaves. This non-stem material (biomass) was dried a second time to ensure that the material had reached a constant weight at which point it was weighed to determine biomass yield for each plant. These per plant biomass data (grams/plant) were converted to yield per acre (lbs/ac) for presentation purposes. 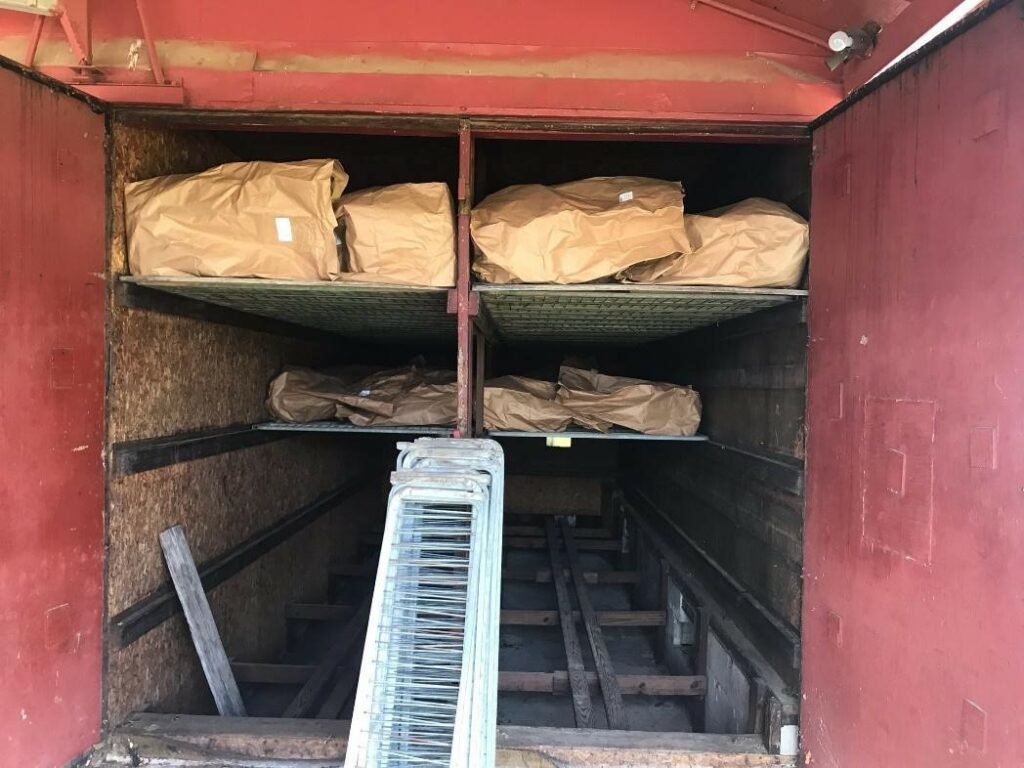 Locations were analyzed separately based on shared soil characteristics and put into two groups: Coastal Plain soils (course, mineral, low CEC; Bertie county, Sandhills Research Station, Lower Coastal Plain Research Station) and Piedmont soils (heavy clay, high CEC; Piedmont Research Station). Biomass production in both locations showed a significant linear plateau relationship with nitrogen rate (Fig. 5). Specifically, we observed a linear increase in biomass production with increasing rates of nitrogen until a threshold point was reached. This threshold was 171 lbs N/ac in the Coastal Plain locations and 124 lbs N/ac in the Piedmont. Once these threshold levels were met, there was no significant increase in biomass production with increasing rates of nitrogen application. The higher threshold value for the Coastal Plain locations is most likely due to increased amounts of nitrogen leaching in these course, low CEC soils. Because nitrogen in heavy clay soils tends to stay put and is not quite as easily leached, we required less applied nitrogen to meet crop demands in the Piedmont. Consequently, when growing in a course, low CEC soil it is critical to split nitrogen application two or three times within the season to avoid significant leaching due to heavy rain events. Conversely, when growing in a heavy clay soil, split application (twice in a season) is adequate. 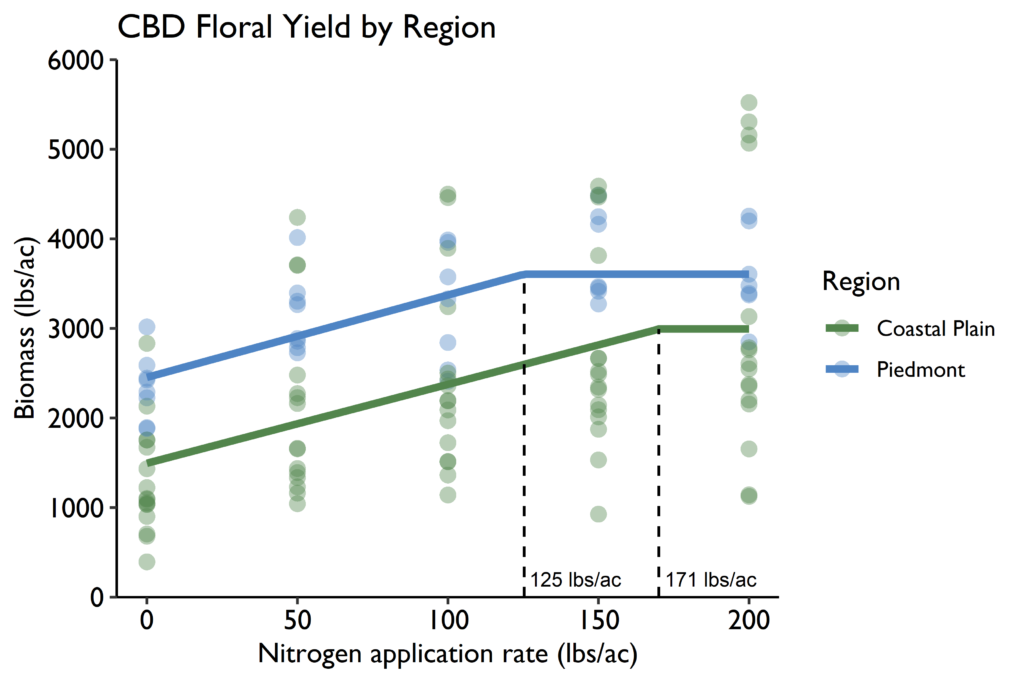 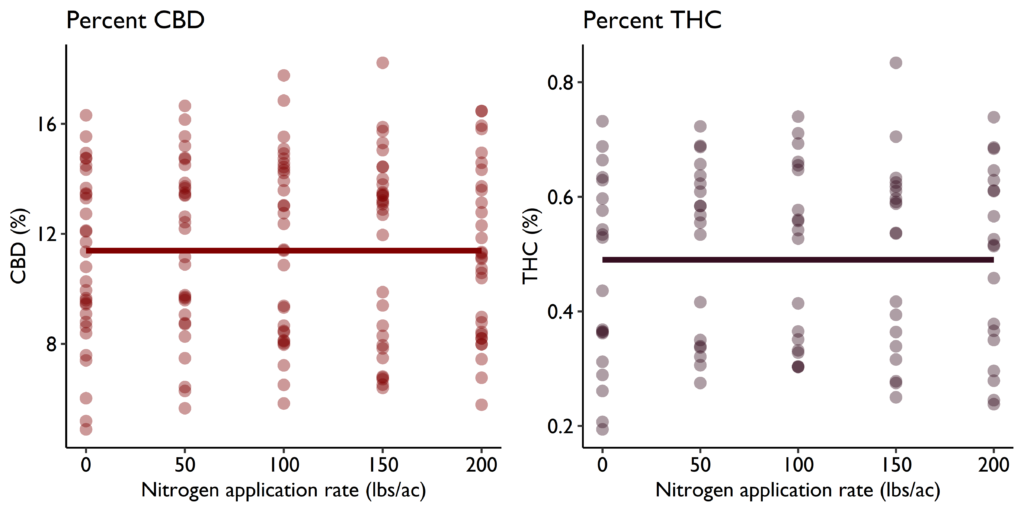 Figure 6. Relationship between percent CBD and total THC to applied nitrogen. No differences were observed between Coastal Plain and Piedmont, thus figures represent data from all locations and years combined.

We found that potassium rates did not increase biomass production (P>0.5; Fig. 7). While we tried to find soils with low concentrations of residual potassium, it appears that the potassium content in these locations was adequate and supplemental potassium was of no benefit. Potassium indices from soil tests taken prior to experimental initiation ranged from 26-44, which translates to approximately 90-120 lbs K2O/ac. Similar to our nitrogen rate trials (Fig. 5), yield was overall higher in Piedmont soils than in the Coastal Plain soils. 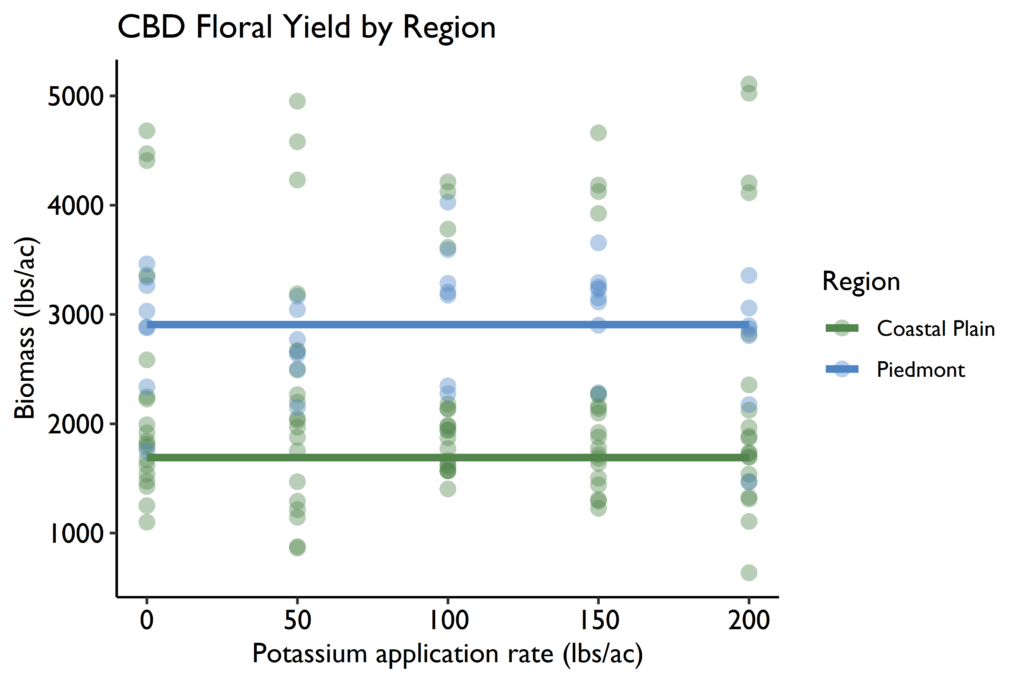 Similar to our nitrogen results, potassium rates had no effect on THC or CBD concentrations (P>0.5; Fig. 8). 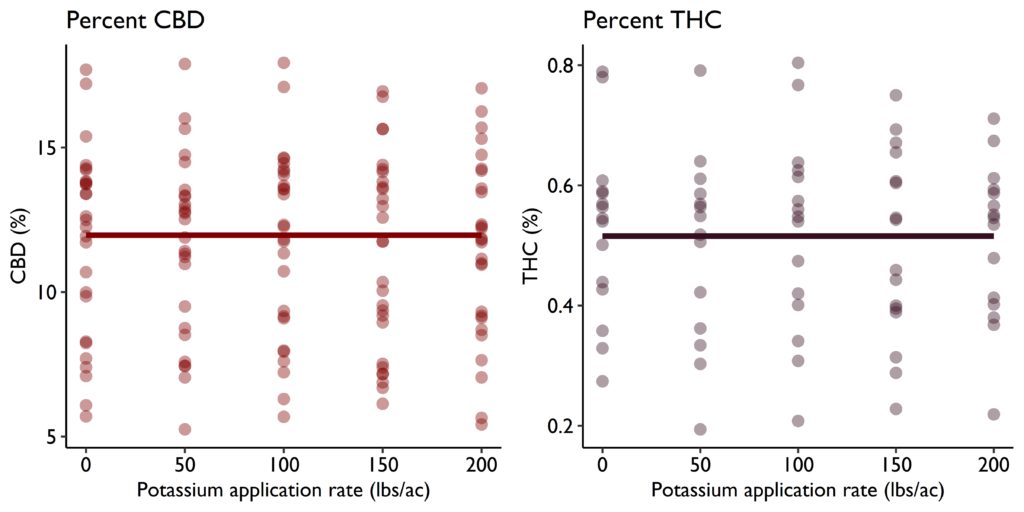 Figure 8. Relationship between percent CBD and total THC to applied potassium. No differences were observed between Coastal Plain and Piedmont, thus figures represent data from all locations and years combined.

The results from these trials indicate that nitrogen, not potassium, is the driver for floral hemp biomass production in North Carolina. Locations having sandy/course soils with low CEC required higher nitrogen rates to maximize yield, whereas soils with high clay content required less nitrogen. Neither nitrogen nor potassium affected cannabinoid concentrations. Note that total THC from bother experiments exceeded the legal limit of 0.3%. We attribute these high levels to late harvest: generally we recommend harvesting at ~25% amber trichome. However, it is critical that growers test their hemp as it matures to monitor cannabinoids and ensure that the 0.3% total THC limit is not exceeded.

When establishing a fertility program for floral hemp, having an up-to-date soil test on all fields is critical. While we did not observe any benefit to additional potassium, soils with lower K-Indices than those used in these trials may benefit from supplemental applications to reach ~ 90 lbs K2O/ac. Finally, regardless of soil type, we strongly recommend splitting applications of nitrogen to avoid losses due to leaching.

This work was a collaborative effort among NC State University, the N.C. Department of Agriculture and Consumer Services, and N.C. Cooperative Extension. We would like to thank all those involved in the research including station staff at participating research stations, NCDA&CS Regional Agronomists, NC State Extension Tobacco Agronomy staff, and the cooperating farmers in Bertie County. This research was funded through the NCDA&CS New and Emerging Crops Program.